It's been a busy c 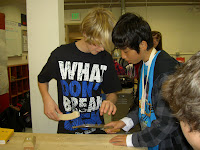 ouple of days for our friends from . On Monday they had their first day at , their host school for the week. Each of the 33 Japanese students has an American "buddy" that they are shadowing this week. Most of the students are shadowing their host brother or sister. The students who don't have a host brother or host sister at Chinook were assigned someone else to be their buddy. We were overwhelmed with the response from the Chinook students when we went looking for buddies. It seemed like everyone wanted to have a Japanese friend for the week. 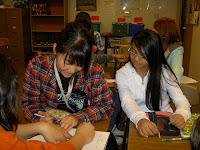 In the end we came up with thirty-six buddies, (extra to cover for a field trip on Friday), that were eager to share their classes, their lunch break, and the rest of their school day with a new friend from . Its an interesting situation on both sides. The Japanese students are trying to make their way in an unfamiliar school, with an unfamiliar language, in this great big unfamiliar country. The Chinook students are trying to navigate a normal school day with a tag-a-long who speaks little Eng 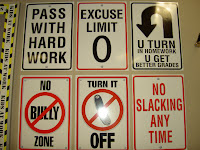 ese students have been fully immersed in the American middle school—classroom time, craziness between classes, cafeteria food—but luckily, no homework. (Except for a nightl 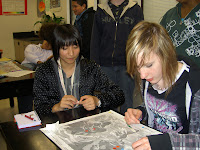 The comments I've heard from the Japanese students are great. "Chinook is big", "lunch is big", (sensing a trend with the big thing here), and often, "students are nice".

Despite the language barrier, missed buses, and a bee sting, it’s been a good experience for both the students at Chinook and the Japanese kids. 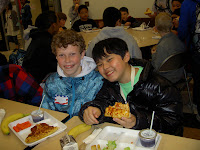 We're grateful to the students at Chinook for sharing their school days with our Japanese students.


I'd like to hear some of your stories. How has it been to be a host buddy? What have you learned? If you could be an exchange student in any country for a week, where would you go?