I haven't written a blog post here since July. I had a great summer, watched teens do great things, suffered writerly angst, and received the first edit letter for my second novel (due out September 2013). All of this passed without so much as a sentence about it on my blog. Blame it on summer laziness, summer busy-ness, or what have you, I didn't blog. At least not here. (I did however write one post for the Class of 2k12).

You might be wondering what life-shattering event could have possibly pulled me out of my blogging slump and caused me to re-visit my orphaned blog after two and a half months. Strangely enough it was a dream, so I'm dubbing this post "Random Thoughts Thursday."

I picked it up and suddenly there were people all around me. I could see the question on their faces,


"Is she really going to eat that?"

I am not a germaphobe. I have been know to invoke the 3-second rule when it comes to something really delicious falling on my "not so pristine" floors. But honestly, I'm not sure if in real life I would pick up a piece of chocolate (even really really good chocolate) off the sidewalk and eat it.

Today, during my morning run, (as I was scanning the sidewalk for a piece of really really good chocolate) I was thinking about the dream. I came up with a couple of analogies.

The first one was this:

I just turned in my first round of revisions for my second novel to my editor. This has been a book that has made me crazy. I sold it on proposal with a sliver of an idea and it's taken a year for me to get it where I felt like I knew the story and I liked it.  (Compare that to 8-10 weeks for the first draft of BREAKING BEAUTIFUL). In less than a year (fingers crossed) my second baby will be out into the world and open for criticism. Even though I've been through it once (and maybe because I've been through it once) that scares me. In fact very few things in my life are as terrifying as people actually reading what I've written.

Any yet, I've wanted to be an author as long as I've known there were real people (and not magical fairies) that wrote books.

So back to my dream. If being an author is like the chocolate, something I really, really want, then why should it matter what everyone else around me thinks? Even if it isn't perfect and may even be dangerous (to my emotional security)?

I have another analogy that I will put forth in a later blog post, one that I've been thinking about for a long time, but for now I want you to think about that chocolate, (I know I have been) and ask yourself this question,

What dream are you holding back on because you're afraid of what other people will think?


I hope that question will help you come up with the motivation to move forward with something that you've held back on. (Then I'll feel like my random thought wasn't in vain.) 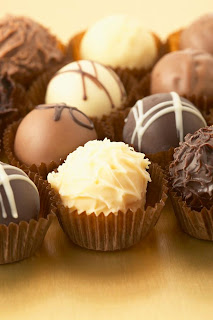 Or maybe you'll just come to the conclusion that Jennifer is so obsessed with chocolate that it has invaded her dreams. :)