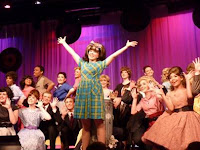 What happens when you take a cast of high school students and ask them to put on an iconic musical that is on its surface a comedy, but with an huge underlying message of racial and size prejudice? If you're the drama students at Timberline high school in Lacey, Washington, the answer is something AMAZING.

As soon as the curtain opened on "Good Morning Baltimore" I knew Timberline's performance of HAIRSPRAY was going to be something special. Maybe I should have guessed before that, based on the number of people who were turned away at the door of this sold-out final performance. Lucky for me, I had managed to snag the last two advance seats because my daughter HAD to see this musical.

I'm so glad I got the opportunity to participate in this show as an audience member. I say participate instead of watch on purpose, because this was truly a musical to participate in. The acting, the singing, the music, the costumes, THE HAIR!!! (they literally had wig sponsors for almost the entire cast!), all begged the audience to be part of the performance. In fact, there were several scenes in which the cast was dancing and singing in the aisles and encouraging the audience to join them. There was even one scene where members of the audience were brought on stage to hula hoop.

HAIRSPRAY director Brenda Amburgy says, "....we try and take the audience with us as the curtain is raised."

I could go on and on ab 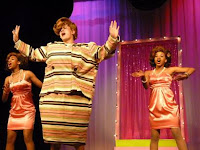 out the acting and singing. Jacob Hoff was laugh out loud hilarious as Edna Turnblad, the John Travolta character in the movie, (how did he dance in those heels and keep his voice like that through the whole show???).

As Ms. Amburgy put it, "if you don’t have an Edna like we had in Jake Hoff you really set yourself up for less than the best."

Makayla Tillman was sweet and spunky as Tracy, Marissa Jacobsen and Alaina Woolsley were wickedly funny as the Von Tussles, Aubrey Taylor, Symphony Canady, Kayla Bridges, and Jasmine Buhain-Slater literally blew me away as the "Dynamites," (the back up singers), along with other amazing voice talents; Stacey Ejim, as 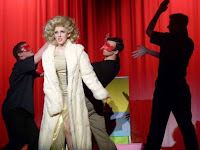 Every part was cast beautifully from Julian Fajardo (Corny Collins), Sam Kegely, (Link Larkin), Austin Tibbits, (Wilbur Turnblad), Hayley Matson who played Prudy Pingleton, the Jail Matron, and the Gym Teacher, all fabulously well, Joe Cheney who played both Mr. Spritzer and Mr. Pinky, and Trevor Shaw who played the WZZT Cameraman and Sara Roundtry as the WZZT assistant. (Yes, I am mentioning everyone in the cast because they were all that good!)

A play like HAIRSPRAY can't be put on successfully without an army of multi-talented actors.The main cast was supported by an ensemble full of incredible dancers, singers and actors, all of whom did a fabulous job.

Of the entire cast, Ms. Amburgy said, "The kids knew all the songs coming in which helped but to dance, sing and act was the challenge…..they rose to that challenge but like an athlete they had no idea how in shape they had to be.

"Our philosophy is 'Trust me' which I say many times in rehearsals. We put the vision of opening night in their heads and try and keep it there with lots of encouraging words."

Of course such a great 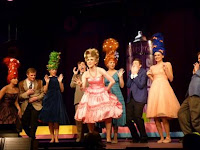 performance wouldn't have been possibly without an amazing director either. I'm positive that Brenda Amburgy put days and days into this show, and she gives credit also to a wonderful support system:

"It took many talented people to make this happen and I have been working with the same team for 10 years so we are a well oiled machine. Gwen Barnes is the genius behind the dancing and Terry Shaw makes the vocals and orchestra top notch. I have worked with Rick Wehmeyer for over 25 years, and having him joint the team for wigs (and I mean WIGS), make-up and hair on this show was unbelievable.

The music, the dancing, the sets, the costumes, and the acting all had the feel of a professional musical, but what really shone through in this for me was the heart and message in this performance of HAIRSPRAY. I think that having teenagers put on this show gave it a deeper feeling. The part of the play when Stacey Ejim and the other African-American students sang, "I Know Where I've Been," literally brought tears to my eyes. These were kids singing about an era they never lived through and racial and social prejudices I hope they don't ever have to experience, but behind they put their whole heart and voice as well as their own experiences, their energy, and their hope for the future.

Ms. Amburgy put it this way: 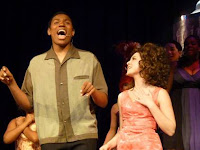 o are diverse student population at Timberline and we train many students to be in our shows that otherwise wouldn’t be given the opportunity. Performing in a THS musical is a Rainbow experience…..to quote a line from the detention scene. We are lucky to have students of many colors who walk through our doors during auditions and sometimes I have to go out and ask them to come. Many kids just need to be asked."

I know the camaraderie and friendships that are developed when kids work together to accomplish a goal; whether it be a musical, a sports team, or a club, last long after the goal is accomplished. I believe that kids like the ones in this play have the ability to change the future, through their actions, through their voices, and even through performances like HAIRSPRAY. 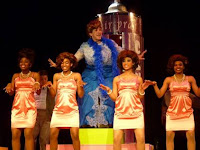 Thank you to Ms. Amburgy, her support staff and all of the kids who participated in HAIRSPRAY for putting on what was literally the best musical production I have ever seen by a high school.

I would love to hear more from the participants in HAIRSPRAY. Please leave your comments about what it took to put on this fabulous musical.
Posted by Jennifer Wolf at 9:13 AM