***Hi, I’m Jennifer’s older sister (by 14 months) Kristin Amrine. She and I started out sharing a room and arguing over toys, but growing up on a farm in Idaho, we soon found oth

er things to fight about--whose turn it was to milk the cows, who got to take the car out on the weekends, and boys. Yes, we were that close--best friends in fact. It’s no wonder we share so many of the same interests, (like writing), but our lifestyles are a little different. After we left home, she chose to raise her family in the wet, eternally green Western Washington Area. I’m perfectly happy to live in a warmer, much drier (and browner) area--the Sacramento Valley. Though we are far away, modern technology has kept us close. She is still my favorite (and only) sister.*** 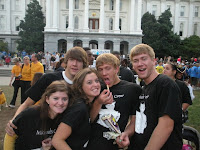 is blog to talk about the "amazing things" teens do, but she likes to focus on Washington teens. I had to let her know that Washington State does not hold a monopoly on good kids (does anyone sense the sibling rivalry?). After telling her about an amazing experience I had last weekend, she agreed to let me have a guest spot on her blog 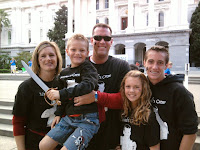 his family, got involved in this cause three years ago when his brother, Michael almost died. Michael was diagnosed with Juvenile Diabetes. Ranse, along with friend and fellow classmate, Katlin Hibbard (also diagnosed with Diabetes) were key in getting together a team of over 250 members to raise money and walk for the foundation.

For the Gale family, the walk is the main fund raising event of the year, but just the icing on the cake in their campaign to support the JDRF. Michael and his mother have been to the California capitol, speaking with members of congress. Earlier this year, 6-year-old Michael was chosen to go Washington, were he met President Obama. But his biggest thrill came in June where Michael, his mom, and eleven-year-old sister were invited back stage to meet Nick Jonas (who also has Juvenile Diabet

es) and the rest of the Jonas brothers.

Weeks prior to the JDRF walk in Sacramento, emails and Facebook messages were sent out to let everyone know about the walk, Katlin and Michael, and the many other children living with Juvenile Diabetes. Friends and classmates became actively involved in fund raisers leading up to the walk. Sunday morning (before 9:00am), they doned in matching t-shirts 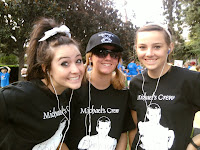 and pirate gear (Michael’s trademark—a cure is the only treasure). Katlin, Ranse and other teens lead the way, raising over $20,000 dollars for Michael’s crew, part of a $100,000 effort.

Hundreds teams of walkers wore matching shirts, held signs, and walked proudly in honor of a child they knew and loved 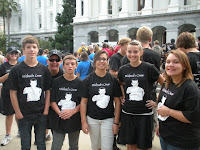 , but the teens representing Michaels Crew were at the front of the pack. Liberty Ranch High football players were joined by there families and became the cheerleaders; raising enthusiasm and 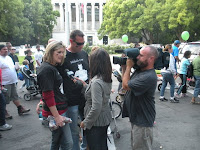 unity among the walkers, attracting so much attention that television crews stopped the Gale family and interviewed them. With tears in her eyes, Michael’s mom Shelley, told the reporter about her families struggle, but how grateful they were for the support of the community and especially the teens that were part of the team.

When I wrote to Shelly to tell her about the opportunity I had been given to be part of Jennifer’s blog, she wrote back and told me: “I've added up the money for this year and we are just shy of $20,000!!!! Yes, that's right $20,000! Just for this year and over $46,000 since Michael was diagnosed. I was blown away with the total. Never in a million years did I think we could raise that much money in such a terrible economy. Guess it just goes to show that when you share your passion about something and it's for a worthy cause people's hearts will open and be willing to help those in need. We are truly blessed by everyone that supports us. This is a tough disease to deal with day in and day out and to arrive at the walk each year and see the swarms of people there for Michael, gives us that drive to work that much harder.”

What a way to sum it all up, and goes to show that we, both young and old, can do great things if we just make the effort. The young adults in our communities are enthusiastic and ready to work for a cause. I think the future looks bright!