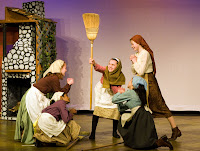 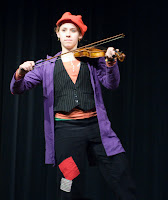 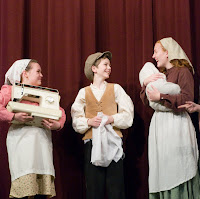 The selection process for incoming students at Aspire has been a source of controversy in this community. I would urge you to go see "Fiddler on the Roof" and see how these students have risen above the controversy and come together to show their unity, not only for their school, but for all of Lacey.
Posted by Jennifer Wolf at 3:06 PM No comments:

We’re all bombarded with it—gorgeous women, dressed in almost nothing, perfect bodies, perfect skin, perfect teeth, Photoshop perfection. It’s hard for a woman to feel like anything more than a freak compared to those images, much less to feel beautiful.

Advertisers, television producers, and directors have gotten the message loud and clear—SEX SELLS. But what are we selling to a fourteen year-old girl, just growing into a woman and struggling to be accepted and more important—struggling to accept herself?

The message they're getting is harsh and painfully clear.

BEAUTY IS LIMITED TO SEX APPEAL.

A news story in my community brought this into focus for me. A fourteen-year-old girl, trying to hold onto her boyfriend, sent him picture of herself—naked. The story came out when that picture was sent from cell phone to cell phone around the four middle schools in town. The community was outraged and the boyfriend and several others were charged with distributing child pornography.

Less than a week later a Superbowl commercial showed a popular model, sitting i

n a bubble bath with her cell phone. She took a picture of herself and said, “I wonder what would happen if I hit ‘send’.” The next images were of men, dropping things, neglecting whatever they were supposed to be doing to stare at their cell phones.

THIS WAS FUNNY. AND SEXY! AND COMPLETELY ACCEPTABLE!

I recently read a quote from a General Authority in my church, Elder M. Russell Ballard, (Church of Jesus Christ of Latter-Day Saints—Mormons).

He said, “Popular culture today often makes women look silly, inconsequential, mindless, and powerless. It objectifies them and disrespects them and then suggests that they are able to leave their mark on mankind only by seduction…”

As a writer of young adult stories, targeting teen aged girls, I’m increasingly conscious of the message that my stories send. As a mother (I know that comes into this a lot,) I am especially conscious of the messages that are being fed to my almost-teen aged daughter. I find myself searching as I read for what makes a strong female character.Where is a woman's power? Is it sex appeal? Is it seduction?

My own case in point, in my first attempt at a YA novel, I worked hard to make my main character well-rounded. She worked in a nursing home, did community service, and she was a good friend. Then in

the name of word count I cut a bunch of those scenes out. After reading the story, a member of my critique group told me that the main character and the villaness, (a woman who used sex appeal to get what she wanted,) in the story were just alike and she couldn't figure out why the hero of the story would like either of them. I tried to defend myself by saying, “but the main character is hot.” Guess what? It wasn’t enough.

So, I went in search of strong female characters who didn’t rely on sex appeal. Some of my favorites, Katniss from THE HUNGER GAMES, (they tried to make her sexy, but she just came off as tough and everything she did was for her family), Hattie from HATTIE BIG SKY (homesteaded without the help of the rich and handsome rancher next door and showed compassion and love towards her and Mardie from THE RING (female boxer who learned to accept herself for what she was).

One of my new favorite character is Terra in Justine Chen's NORTH OF BEAUTIFUL. Terra is born with a port wine stain on her face. She works hard to maintain a perfect body to balance out the imperfection she sees in her face. The story is about learning to accept

yourself for who you are. By the end Terra finds beauty in herself as she is and beauty in those around her, even in her overweight mother.

So what makes a woman strong and beautiful? Is it perfection? Is is sex appeal?

I submit that what makes a woman strong and beautiful is what's inside--self-reliance, compassion, and intelligence. And reality--zits, flat chests, big thighs, bad hair, and all is far more beautiful and far more interesting than Photoshop perfection could ever be.

character and compassion. Hopefully, the message my stories send will give teenager girls a sense of how beautiful and strong they already are.