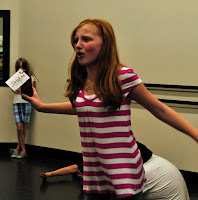 When you ask a kid “what are you doing this summer?” you’ll probably get answers like going on vacation, camping, swimming, or just hanging out. If you ask a kid that question and get an answer like celebrating my unbirthday, having tea with a guy in a big hat, or playing Simon Says with a murderous queen and a bunch of cards, you might think they’ve been out in the sun too long or that they’ve been eating off the wrong side of the mushroom. Or it might just be that they’re involved in summer drama.

Last year Bretschneider and Kirkwood Musical Productions debut summer performance of "Aladdin" was a hit and a lot of fun for the kids involved. This year they’re set to do it again with Disney’s "Alice in Wonderland".

I got to visit “Wonderland” (for now, a dance studio on the east side of Olympia). I saw “Alice” shrink and grow, I saw a pompous dodo bird directing a host of goldfish, mermaids, and lobsters in a caucus race, and I saw a group of kids aged 6-15 having a great time.

ir parts. It’s an ambitious project—a full-scale musical complete with song and dance numbers, costumes, and sets ready to go on in about four weeks. (Not to mention wrangling more than 40 kids aged 6-15). If what I saw today is any indication, this will be another fun and amazing production.

Anyone who is familiar with the Disney version of “Alice in Wonderland” will recognize the songs, the characters, and many of the scenes. The Mad Hatter is there, the white rabbit, the Queen of Hearts, a caterpillar and twin boys, one of which may (or may not) be named Dum. You’ll see my favorite character, the Cheshire Cat in triplicate and several versions of Alice, from small to tall.

Mark your calendars now for a fun night of family entertainment. “Alice in Wonderland” will be performed at the Timberline high school theater in Lacey, (6120 Mullen Road Southeast) and will run July 22nd, and 23rd and 29th and 30th. There will be a matinee performance each day from 10-11:15 and an

evening performance from 7-8:15. Tickets at the door are $7 for individuals and $25 for a family. Advance and group tickets are being sold by cast members for $5 for an individual and $20 for a family. You can contact me through this blog or Elizabeth Bretschneider at ehbretsc@comcast.net for more information.
Posted by Jennifer Wolf at 9:50 PM