WE HAVE ARCS (And you could win one!) 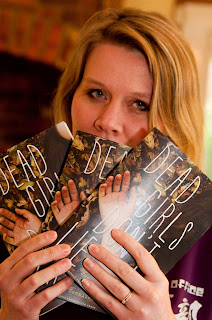 On Friday I got my ARCs (Advanced Reader's Copies) for DEAD GIRLS DON'T LIE. I wasn't really expecting them so it was amazingly cool to open a package that I thought would contain my next round of edits and find a book with my name on it.

It's funny, I anticipated and fretted over every little step with with BREAKING BEAUTIFUL, but some of this second book process has snuck up on me, but guess what? Getting a bound copy of a book you wrote is just as cool the second time. Maybe even more so.

For me, this second book represented a lot more sweat and tears than the first one did. Part of it goes back to being busy with the launch of book one, part of it is because I know what it's like to have strangers (and even people I know!) read and review something I've written, and part of it's because when the book sold, I had 50 pages an outline and a glimmer of what it would become.

Despite trying to be more on top of the story this time; keeping notes on things like tattoos and scars and making copious oultines throughout the whole writing process, the story surprised me a few times. I hope it surprises you.

As a general rule, I don't like give-aways, but since I have a few advanced copies of this book, and because I'm so excited to share it, I'll make an exception.

Here's a little about the book:
Rachel died at two a.m . . . Three hours after Skyler kissed me for the first time. Forty-five minutes after she sent me her last text.

Jaycee and Rachel were best friends. But that was before. . .before that terrible night at the old house. Before Rachel shut Jaycee out. Before Jaycee chose Skyler over Rachel. Then Rachel is found dead. The police blame a growing gang problem in their small town, but Jaycee is sure it has to do with that night at the old house. Rachel’s text is the first clue—starting Jaycee on a search that leads to a shocking secret. Rachel’s death was no random crime, and Jaycee must figure out who to trust before she can expose the truth.

Entering is easy. Just put your name and a way to contact you like an e-mail into the comment box. Next Wednesday I'll do a random drawing from the entries I received. The winner receives a signed ARC of DEAD GIRLS DON'T LIE, some swag and maybe even a little chocolate.

I can't wait to share my newest child of paper.

DEAD GIRLS DON'T LIE is out officially on September 17, 2013. If you would like to review it, you can contact me and I will direct you to the right people at my Walker/Bloomsbury, my publishing house.

Posted by Jennifer Wolf at 1:12 PM