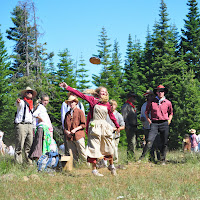 I woke up with a wonderful thought on day three (and I'm assuming most if not all the other Trekkers shared this same thought)...

Day three was reserved for pioneer activities, rest, and spiritual discussions. The pioneer activities included black powder rifles, crafts made out of leather, wood, and horse shoe nails, and pioneer games like hoop rolling, gunny sack races, cherry pit spitting contests, tug-o-war, and a (fake) buffalo chip throwing contests. Those that wanted to were able to do laundry,

pioneer-style. (Two days of Trekking in the dust with only one extra outf

it made even doing laundry on a wash-board sound good.)

The most popular station was the hair-washing station. Even though the water was from the creek, icy cold, and not completely bug free, the kids lined up to get their hair washed. The uniq

ue thing about this station was that the kids had to partner up and wash each other's hair. It was a simple service that they could do for each other, and touching to watch. It made me think of the Christ washing his disciples' feet in the New Testament.

When the pioneer activities were over and everyone was a little cleaner, the Trekkers were treated to a hearty meal of...you guessed it, fry bread. (Day three for those of you keeping track).

After lunch they had

the chance to kick up their heels (and A LOT of dust) by square dancing. The youth had had several square dance practices and the leaders had even booked a live band (not exactly the kind of band teenagers were used to dancing to but they had fun.)

After the dance was over it was time for things to take a more spiritual turn. The three companies went to three different areas for a discussion about how Trek related to their lives. The discussions were lead by members of the Lacey Stake Presidency (A Stake is a unit of the LDS church composed of several regional congregations.)

“Links,” was the theme in one area. President Moss, first councilor in the stake presidency told the Trekkers that the experience of Trek linked them to the pioneers in the early days of the of Later-day Saints. He shared stories taken from pioneer journals. As a reminder of the link between them and their ancestors, each of the Trekkers got a few links of chain to tie onto their shoe laces.

In the second area the youth were given a little bag of flour—four ounces—the exact amount that one handcart company was given for their daily ration when food got low.

Then the youth were posed a challenge: who would be willing to live on just four ounces of flour for the next twenty-four hours? President Warning, second counselor in the stake presidency, looked each of the youth in the eye and said, “Don’t any of you dare hesitate. You could do it. You can do anything.” The lesson of the little flour bags was this—they may face harder challenges even than living on only four ounces of flour for twenty-four hours, but with their own strength, moral courage, and Lord on their side, they can accomplish anything.

The final area was “The Iron Rod”--a rope wound through the woods and crossed over fallen trees and other obstacles. The story of the Iron Rod comes from the Book of Mormon. In this story the prophet Lehi has a vision about an Iron Rod placed along a straight and narrow path that leads to the Tree of Life and everlasting joy. The Ir

on Rod in the vision and our Trek “Iron Rod” are both symbolic of holding to the word of God and staying on the right path in life, the path that leads to eternal happiness.

kkers were blindfolded, led to the Rod and told to hold on no matter what. The way was dark, treacherous, and filled with conflicting voices. Along the way there were helpful suggestions as well as temptations (a candy bar can be a powerful force after three days of fry bread).

If they made it to the end of the rope without letting go, the Trekker’s received congratulations from the stake President, Eric Coppin and a piece of fresh fruit. If they didn’t make it, they were met by their Trek Ma and Pa and a gentle discussion about choosing the right path.

This was my first time watching the Iron Rod as a mother of one of the Trekkers. I cried when I watched my son’s best friend let go of the rope because he believed the lie one of the tempters told him. It made me thing about how much my kids need their friends to stay on the right path and away from negative peer pressure. The Iron Rod s a powerful message about the importance of trusting the right voices and hold

ing onto what is true.

After the Iron Rod and discussions the the Trekker were encouraged to find a place on their own to read scriptures, their letters from home, pray, and reflect on what they had learned.

Day three closed with a Testimony meeting—a chance for the youth to talk about their experiences on Trek and to share their beliefs. Set against a background of sunset and purple mountains they talked about the strength, faith, and unity

they had experienced during Trek.

Posted by Jennifer Wolf at 9:13 PM