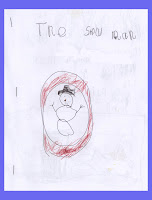 I had a moment of mommy triumph tonight as I tucked my 6-year-old into bed. You know one of those--"Wow, I might just be doing okay at this raising kids thing." It wasn't a huge moment like:"My kid just graduated with a 4.0 and is trying to decide between the four Ivy League colleges he's been accepted to." But it was significant to me. The moment was this, as he climbed into the top bunk he had to move a bunch of stuff out of his way. But it wasn't just any stuff, it was BOOKS!!!

Yes, at the tender age of six my last child has become a reader. YAY me! And more than that, when I asked him what book he wanted me to read him, he said he wanted to read HIS book to me. One he had written himself called, THE SNOWMAN.

o builds a snowman in his back yard and then shows it off for his friends and family.

The most compelling line for me:

One time a boy made a snowman,
and he named it Bob.
Mom came and said, "Bob?"

No, he didn't punctuate it correctly (he did spell "snow clothes" right on page 4 though) and the story was basic, but he wrote a book. It had a beginning, a middle, and an end. I love that he feels like he can do that, and I like to think he's following in my footsteps. 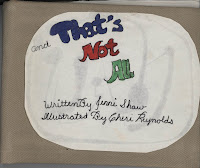 It made me think back to one of the first books I wrote. It was called AND THAT'S NOT ALL. (Although I was about 12 when I wrote that one.) I have a brother who is 9 years younger than me. I used to read books to him sometimes at bedtime. I got tired of it after a while so I wrote a rhyming picture book and made him memorize it. When he asked me to read him a bedtime story, I started the story and then said, you know the rest.

As a gift to him later that year, I wrote the book down, sewed the pages together, and had my friend do illustrations for each page. Essentially, I published a book. 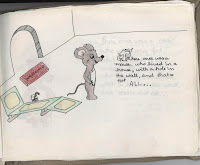 There once was a mouse,
who lived in a house,
in a hole in the wall,
And that's not all...

I still have that book. When I got my book deal, my baby brother (now about 6 inches taller than me) posted on Facebook that he was proud to know that the first book I had ever written for was for him.

As long as I can remember I've wanted to be an author. At my mom's house there's a drawer full of my writing. My mom says she keeps it just in case there is a HARRY POTT

ER in there somewhere. (I doubt it, but it's a nice thought.) I've always thought of myself as a writer. So I guess I can say I've been honing my craft for some 25 years or so.

For all my writer friends out there, I want to know...

What was your first attempt? Have you always been a writer? When did you first put pen, (or crayon, or typewriter, or word processor) to paper with the design to create a story?

***Note, the illustrations for my first book were done by my friend Cheri Reynolds, when we were like 11 or 12? Cheri just finished her Nanowrimo novel. Congrats!***

Posted by Jennifer Wolf at 9:46 PM