t’s the only way to describe how I felt when I walked into Chinook Middle school on Wednesday, the day after the coin drive to raise money for Japan was announced. Four long plastic tubes lined the office window to hold the students' donations, (see Friendships Bridging the Pacific for more details about the coin drive). The tubes were there so the Chinook students could see which pride, (North, South, East, or West), had donated the most. When I left the school in the middle of the day on Tuesday, the tubes were empty. By the time I came in the next morning two of the tubes were nearly full. As I watched, another student came in to deposit his donation. He completely filled one tube and the extra money had to go into a big plastic jug.

It was supposed to be a penny/loose change drive, but there were ones, fives, and even twenties wedged into the tubes. One girl brought a big jar of change, then when she saw the bills that were donated by o 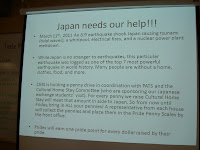 ther students she decided to bring in twenty dollars of her babysitting money. By Thursday the tubes were abandoned because there was just too much money coming in to fit in them.

The culmination of the whole week was an assembly on Friday. The Japanese student performed an exercise routine and a dance for the Chinook students. Their performance was met with bleacher shaking screams and applause. Then Ms. Rae, Chinook's principal came to the front. Her voice cracked with emotion as she announced that the money was still being counted, but the Chinook students had raised well over a thousand dollars. With matching funds from Cultural Homestay International, (the organization that brought the Japanese students to the US), more than two thousand dollar

s is going to the American Red Cross relief efforts in Japan thanks to the Chinook students.

The Japanese coordinator of the group, Toshiki Hirose, thanked the students from Chinook not only for their friendship, but for their humanity. At the goodbye party that night, Mr. Hirose expressed the same sentiment to the host families. He pointed out that during the week they were here, he and the 26 students relied on the kindness of strangers for a place to stay, food to eat, transportation and basically everything they needed. Although I have hosted exchange students before, I had never thought of it that way.

As I look back, the entire week was a lesson in humanity for everyone involved. We learn

I appreciate the lessons I learned from the students at Chinook and the students from Japan. This week renewed my hope for the future and confirmed my belief that their are kids doing great things on both sides of the Pacific.

The money has been counted and the total amount donated by the students at Chinook Middle School was $1,695.43!

Posted by Jennifer Wolf at 4:41 PM