During the month of February, I'm going to be talking about (you guessed it) romance, specifically teen romance. This Friday (the 3rd) for Friday Firsts, I'm doing first kisses, and I want to hear lots of "FIRST KISS" stories (writing research) so get ready to spill it. Then on Wednesday the 8th I'm doing Wednesday Worsts, and I want to hear your WORST KISS story. (Keep both stories PG please.) E-mail your stories to me at jennifershawwolf@gmail.com.

And...In honor of Valentines Day on the 14th, I'll be gifting you a romantic short story. I'll also have a couple of Teens Doing Great Things posts this month that don't have anything to do with romance, but everything to do with love.

You know what I'm talking about, that impossible crush, the one you had/have on a celebrity--a movie star, a rock star, a professional athlete--someone totally out of reach. This is probably the only crush that's okay to share with your best friend, a group of friends, or a millions of other screaming teens. Often a rock star crush is your first crush because it's a safe crush. No matter how hard you're crushing, deep down you know, your crush will never result in an actual relationship.

My inspiration for this post came from my thirteen-year-old daughter. Last night she made a giant card for Harr 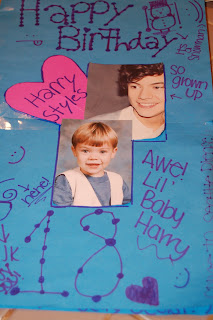 y Styles, one of the singers from ONE DIRECTION the European boy band she just discovered. She listens to their songs all the time (you can check their song "What Makes You Beautiful" here) she has pictures of them on her phone, and she is working on a "wall of hotness" for her bedroom. To celebrate Harry Styles' 18th birthday, she and her friends held a birthday party during school lunch.

This all reminds me of my rockstar crush. It was the summer of 1990. My older sister, my friends and I, bought tickets to see a NELSON concert in Pocatello, Idaho (check the link if you don't know or don't remember NELSON). Even before the concert we were all INFATUATED with the long, blonde-haired, cute twin brothers. (I was also quite jealous of their hair, mine was never that long or that shinny).

We spent the night before the concert making t-shirts to wear. My older sister drove so we had the freedom of being 3 hours away from home and on our own. We got there early, (a huge accomplishment for five teenage girls) and the coolest thing happened... WE WERE THERE WHEN THE BUS ARRIVED SO WE GOT TO MEET THE BROTHERS IN PERSON!!! (Insert teen girl squees here). We actually got to talk to the brothers, they signed our t-shirts, they signed our arms, they signed our notebooks.

The concert was amazing and I knew I was IN LOVE. I was convinced that I would see Mathew (my favorite brother) again, and we would one day get married. I even wrote stories in my journal about how/where/when we would see each other again.

As my daughter and her friends celebrate Harry Style's birthday with cupcakes, signing the giant and listening to ONE DIRECTION, I think I'll watch the music video for AFTER THE RAIN, and reminisce.

What about you? Who did you have (or do you have) a rockstar crush on and why?