ys ago I was standing in line at the cutting counter of a local fabric store, when I overheard two ladies talking. They were discussing "kids today" and how they don't do anything but hang out, play video games, and get into trouble. One of them said, "Whatever happened to Boy Scouts?"

The irony...I was waiting to buy fabric to make a Den Flag for my Wolf and Bear Cub scout group. (*Note, I sew occasionally, dangerously, usually only costumes, pajamas or crafts--stuff that doesn't have to be perfect*) 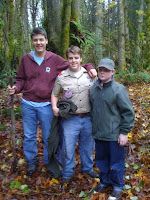 I didn't butt into the ladies' conversation, but I wanted to say, 1) "Kids today" do a heck of a lot more than g 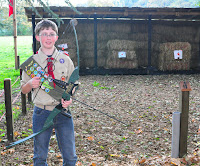 et into trouble and 2) Boy Scouts is alive and well. In fact it's alive and 100 years old this year.

My dad and my three brothers were all avid scouts, my husband is an Eagle Scout, my oldest son is soon to be an Eagle Scout, and (as I said), I'm a Cub Scout Den Leader, so you could say that scouting is big in my family. 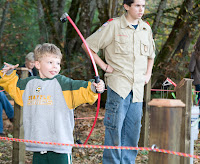 I was thinking about what the ladies said as I attended a scout Court of Honor on Wednesday night. The Court of Honor was a family event, held at the camp where the boys attended scout camp in July. The meeting started with a barbecue and a chance to see what the scouts had accomplished. Thanks to the scouts the camp (Camp Nisqually in Lacey, Washington), had improved significantly since the last time I was there. There was a brand new Archery Range 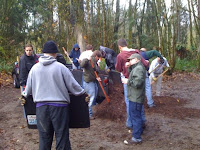 The awards portion of the evening was amazing. There were well over 100 merit badges awarded to boys from the four troops who had participated in the camp. The scouts received merit badges in traditional areas like fishing, camping, and wilderness survival, but they also received badges for things like aviation, financial management, and cooking. For the 100th anniversary of Boy 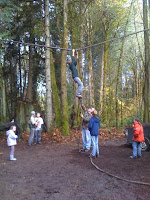 Scouts some of the old merit badges were brought back, so the "Stalking" (now more accurately named "Tracking"), merit badge was awarded along with Signaling and Path Finding.

As a mother of a Boy Scout, I have some idea how much time and energy went into each of these merit badges. Several of the Scouts also received rank advancements--the culmination of several merit badges and fulfilling other requirements.

Needless to say, I was impressed.

I want to note that none of the merit badges were earned for "hanging out," "playing video games" or getting in trouble. Although I'm sure that all of those boys have probably been guilty of one of all of those at some point (the ones I knew certainly have). Through Boy Scouts of America and their own hard work these boys and many others like them are making a difference in their communities and in their own future.

Thank you to Boy

I love talking about kids and teens doing great things. If you have an idea of a kid who deserves to be recognized, please let me know.
Posted by Jennifer Wolf at 12:48 PM