Teens Doing Great Things: An Invitation to the Dance 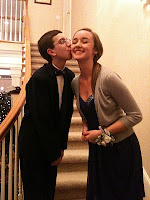 In the wake of all the news about bullying and cyberbullying and in general all the mean things that kids do to each other I love to hear stories about kids being NICE to each other. I was so happy to read a story on the ANWA Friends and Founders Blog (a blog for the American Night Writers Association) about a teen aged girl who forgot herself and did something truly nice for a boy who has special needs.

With the Tanya Parker Mills' permission I'm re-posting the story that was originally posted Friday, December 10, 2010.

*This post was written for a writer's group that is predominantly members of the Church of Jesus Christ of Later-Day Saints.) Clarifications of generally LDS (Mormon) terms were added in green by me.*

By Tanya Parker Mills
During this season 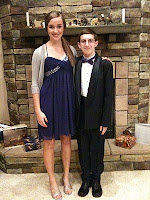 of giving, I was reminded last week of just how wonderful and generous the youth are in our area, whether members of the (Church of Jesus Christ of Later-day Saints) Church or not. I'm writing of a different kind of giving here--not the Christmas presents and food box variety--but the gift of social inclusion to those generally deemed "different."
When my son was first diagnosed with Asperger's in first grade, I checked off several things he would likely never do...play team sports, go to dances, date girls. A mission, college, and eventual marriage were even questionable. I thought he'd enjoy Cub Scouts and Boy Scouts and enjoy getting his Eagle, but no, unlike many Aspies, the outdoors held no appeal for him.

As he grew up in our old ward in California, the youth went through the motions of trying to include him, but many Sundays he came home upset because there were always those who laughed at him and tormented him in some way. I'm so glad we moved, if only for his sake, for it proved to him (and me) that youth in the Church could be as loving and inclusive as Christ wants us to be.
So, what happened last week? I got a text message from one of my former Mia Maids, now a Laurel * and a senior in high school. She's not only a member of the Seminary Council **, but she's quite popular at school (and she's one of the girls my son, a Junior, has a crush on). Here's what she texted: 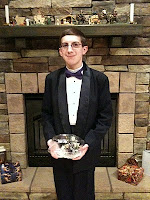 Lily: Would it be okay to take Jason to winter ball on the 18th? Do you know if he wants to go? I know it's the night of the ward *** Christmas party.
Me: I know he'd love to go with you. I'm just not sure he's comfortable about dancing. Let me get back to you, okay?
Lily: Yeah those were my thoughts too. I was thinking maybe we could do the dance for a while and dance with the group and get pics and then peace [sic] out. We'd be at the dance for maybe an hour.
Me: Sounds great. Go ahead and ask him.
Lily: Great! thanks :)
Then on Friday, when Jason went to eat lunch at the Seminary building at school (yes, we are unusually lucky to have **** release time Seminary up here in the Tri-Cities), he saw this huge banner Lily had put up asking him very publicly to the girls ask guys Winter Ball. Of course, he came home ple ased as punch. And on Sunday in front of his whole Sunday School class, he nervously presented her with a long-stemmed red rose and his reply, "Of course I'll go with you, Lily. I can think of nothing I'd rather do."
My only remaining concern was how he would handle the traditional dinner before the dance. My son eats only grilled cheese sandwiches (and only the way I make them), a banana here and there, one particular kind of cinnamon cookie, and Dreyer's Grand Vanilla Ice Cream, and he only drinks water.
As it turns out, I needn't have worried. Lily had already made plans to double with another girl in our ward (who has a brother with more severe Asperger's), and they were planning on grilled cheese sandwiches and tomato soup for dinner. The other girl's mother said I was welcome to come and prepare the sandwiches just the way Jason likes. 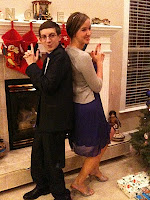 I'm not sure if Lily realizes the extent of the gift she is giving my son. Even though she's half a foot taller than him, this beautiful, talented, vivacious girl is showing everyone at school that Jason is worth spending a special evening with. My son is actually pretty popular on campus in terms of friendship. Perhaps this will open the way for him to actually try asking someone to Homecoming and Prom next year--steps I never thought I'd see.

**Seminary is a religion class that LDS high school-aged kids attend, Seminary Council is like Student Council in high school.

***Seminary is usually taught in the wee hours of the morning before school starts. Some school districts allow "release time" seminary, where the students leave campus for one period a day for religious instruction.

Thank you so much for letting me share this story Tanya. And than you to girls like Lily who go above and beyond to do great things! 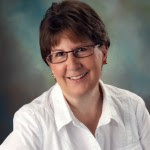 Tanya Parker Mills is the author of The Reckoning, 2010 Writer’s Digest International Self-Published Book Award Winner for Mainstream/Literary Fiction, 2009 Indie Book Award Winner for Multicultural Fiction, and 2008 Whitney Finalist in two categories. You can read more about her and her writing on her blog "Seized by Words" and her website tanyaparkermills. She is a regular contributor to the ANWA Founder’s and Friends blog.