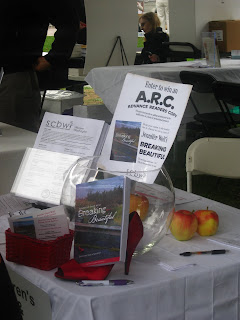 Last weekend I went to Northwest Bookfest, in Kirkland, Washington. I sat at the SCBWI- Western Washington booth to promote that great organization.

Since this was my first real author-type event, I had my teen daughter help me pick out an outfit. I tried to dress nicely, from my satiny blouse to my open-toed high heels.

Nobody told me the event was going to be outside.

It turned out that Northwest Bookfest's title, "It's Raining Books" was aptly named. Sigh. My nice outfit was covered by a jacket, (which I had grabbed as an afterthought on the way out), and my shoes were made fun of by everyone who saw me walking across the waterlogged lawn. (In the nicest possible way, of course.) 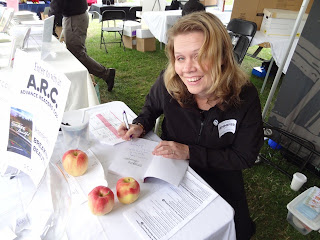 I also gave away a signed ARC. (It made me feel all giddy and authorial, even if I had no idea what I should write when I autographed it.)

And of course I bought books!!! 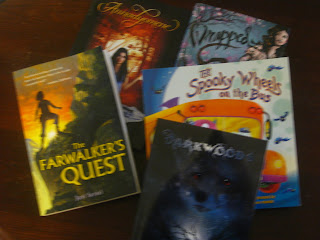 It was well worth venturing out on a cold, rainy, Washington day, but next time I bring a warmer jacket and leave the heels at home.
Posted by Jennifer Wolf at 4:06 PM