Along with much of the world, my heart and my prayers have been with Japan this week and with the friends I have there. The earthquake and tsunami have especially hit home because I as a teacher/coordinator for Cultural Homestay International, I'm preparing for the arrival of 26 Japanese exchange students and their Japanese coordinator next weekend. (See my posts about the group that came last year.)

The students are coming from Southeastern Japan, away from the earthquake and tsunami zone and far enough away from the nuclear plants that they are relatively safe. Still, I have received many calls and e-mails from last year's and this year's host families who are worried about their students. A common theme I've seen is they're looking for a way to help. Even after they find out that their students ar 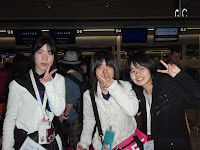 e safe they want to know what they can do.

I love the exchange student program because it shows us we're not so different. The kids are only here about a week, but in that time they become an integral part of our families, and we learn to love them. When tragedy strikes on the other side of the world, it's no longer something bad happening to strangers and foreigners far away, it's happening to people we care about. Getting down on a personal level with kids from a different country makes the borders between nations not so concrete.

My heart and my prayers are also with an American teen who was visiting his grandparents in Japan with the earthquake hit. Although they were in the middle of the quake zone, he and his grandparents are okay. Now radiation leaks have forced them to be evacuated, but there is no gas and no way to get him to Tokyo so he can come home to the United States. As you can imagine, his mother has contacted every possible lead to try to get him home, from churches to the U.S. Embassy. But here's the sweet irony in this story. He doesn't want to come home. This kid who's only 14 wants to stay to help his grandparents and his 90+ year-old great-grandmother. He's worried about them if he's not there. This is just one example of wonderful spirit and courage of kids and teens, not just here, but around the world.

I've seen this same spirit and courage in all the kids who come as Exchange Students and in the kids who are their host brothers and sisters, no matter what nation they're from.

se students who are coming next weekend range in age from 12-16. They'll spend a week living as American teenagers, and get to meet and associate with kids their own age. There will be language barriers and cultural barriers, but within the first day they'll have fast friends here. (Trust me, I've seen it happen again and again.) When they leave, the rising generation from both countries will have a better understanding of each other. The world will be a little smaller. And when bad things happen in another part of the world these kids will have more compassion and understanding for the people who are suffering. I think that's a pretty important lesson to learn.
Posted by Jennifer Wolf at 11:09 AM