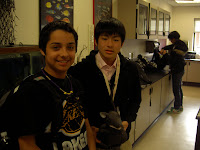 There are many differences between Japanese s 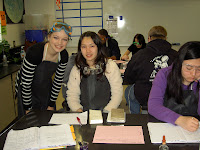 chools and middle schools in the United States. In a Japanese school, the students usually wear uniforms. They are in charge of cleaning up their own buildings, (what a great idea!), and instead of the students moving from class to class, the teachers move. (Except for classes like PE, Science, or Music).

One of the most interesting questions I heard was, “In America it’s okay if boys and g 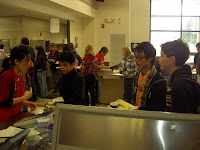 irls hold hands? The teachers don’t do anything to stop them?”

I love watching the Japanese students and the American students interact with each other. Often the language isn’t there to communicate easily, but they find a way. I saw smiles on both sides, and the Japanese teacher reports that the students are happy here. He praised Chinook for the friendly atmosphere. I have felt and appreciated it to. 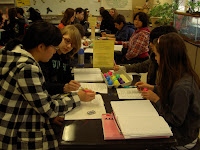 Today during “House Time,” (an ad 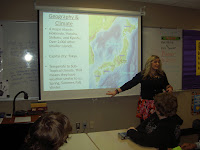 visory class), the students at Chinook watched a power point presentation to learn more about Japan. Because of their connections they are forming with that country through the exchange, the Chinook students wanted to learn more.

Although our Japanese students are from Southeastern Japan and unaffected by the earthquake, the Chinook students still wanted to do something in response to the tragic earthquake and Tsunami. The leadership student decided to have a penny or "lose" change drive to raise money to give to the Red Cross to help with the victims of the earthquake. This fund-raiser is a competition between th 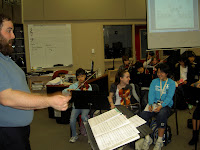 Principal Kirsten Rae said in the meeting for her house, “I would like to see every student c 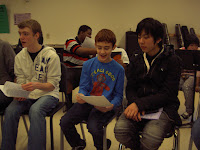 ontribute something, even if it’s just a nickel."

Cultural Homestay International, the non-profit organization that has organized this group has offered to match Chinook’s contribution.

I am so happy to be a part of this cultural exchange and to see teens on both sides of the Pacific learning more about each other and becoming friends.