Eggs, Electronic Babies, and What to Do When Your Water Breaks in English Class 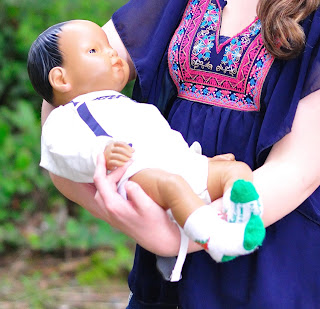 This week my 15-year-old daughter came home with a new addition to our family--an adorable baby boy that she named Bentley. Before you send out congratulations, criticism, or advice on dealing with a teen mom, let me explain. She's taking child development this semester. As part of the class she got to be "mom" for just under twenty-four hours to an electronic baby.

I didn't take any classes where I got to experience anything like this, but when I was in high school I remember kids carrying eggs around with them. They named them, dressed them, (as much as you can dress an egg) and tired to keep them from getting broken. Back in the olden days (when I was a teenager) this was considered a decent simulation of what parenthood is really like. And I'm sure it is, if you're a chicken.

Bentley however, is a full-fledged robotic infant, that has to be changed, fed, burped, and sometimes just comforted. While he was with our family, he cooed, breathed, and cried--a lot. He cried during homework, and dinner, and while my daughter was in the shower. I know because during that time, I got to play "grandma." A title I am NOT ready for, by the way.

And like any real baby, Bentley was no respecter of sleep. My already sleep deprived teenager was up with her electronic child no less than five times.Yes, she was late for school.

If being up all night with an electronic baby with an eerily real cry isn't enough, for extra credit, the kids in my daughter's class can wear an empathy belly. (I think these should be available to any women in her third trimester of pregnancy--to share with her husband.) An empathy belly is something that simulates what it's like to be in the seventh month of pregnancy. (Minus the heartburn, swollen feet, and insomnia.)

My daughter has yet to experience the empathy belly, but she did get to witness a guy wearing it during her English class. Apparently the empathy belly is full of water and somehow this one sprang a leak. The "mom to be" did the only logical thing a teenage guy with a pretend pregnancy and a leak could do, he raised his hand and said,

"Can I be excused? My water just broke."

High school is so much more interesting than it was when I was there. You can't make this kind of stuff up. And yes, that's going in a book someday.
Posted by Jennifer Wolf at 11:15 PM