I'll Walk With You, I'll Rock With You, A Special Benefit for a Special Guy

Have you ever met a person who can make everything brighter just by walking in the room? Have you ever met a family that gives and gives and gives, literally wearing themselves out in service to anyone who needs anything? If you live anywhere near me in Lacey, Washington, or perhaps even Cache Valley Utah, you may have met such a person, and you may know such a family. (I know I do.)

Bryden Belnap, aptly nicknamed "Brydie" or "Brighty" is such a person, and he comes from such a family. Bryden always has a smile, a handshake, or a hug for me whenever I see him. He radiates joy and love and fun. He loves to be around the teenagers in our church congregation and at dances and sporting events. He even took up the honorary position of "assistant coach" this year to one of the high school wrestlers. He brings a wonderful mix of friendly competition, love, and encouragement with him everywhere he goes. He's just a great person to have around.

His family is always doing something for somebody else. His older sister brought me dinner, completely out of the blue, when I was on a crazy deadline. His mom has mentored and mothered several women and kids who aren't lucky enough to have a mother or grandmother like her. His dad is always willing to jump in and help when there's a need. They are just GOOD people.

And now they need a little help.

Several years ago, Bryden's health forced the family to leave their beloved Cache Valley, Utah. Here in Washington, at a lower altitude, Bryden could be free of the oxygen he had to have. Utah's loss was Washington's gain. We have been so blessed to have them with us.

Lately, however, Bryden's health has declined and he needs oxygen again, and more frequently. This means he's stuck at home more often. An oxygen generator would make it so he can get out and do the things he loves; spending time with his friends and family, going to church, attending dances and sporting events. And then we'd all get to see more of him and be part of the light that surrounds him.

So really this is a selfish request.

There's a benefit tomorrow (Friday, April 26th) at 7:00 at the South Bay Grange in Lacey, Washington. There will be a silent auction and lots of fun entertainment and food. The silent auction has all sorts of cool stuff. I'm putting together a great basket of young adult books with donations from Marissa Meyer, Kiki Hamilton, Gina Rosati, Katherine Longshore, and AC Gaughen. On Saturday morning there will be a walk in Lacey and people from around the world are invited to participate and send in donations for Bryden and his wonderful parents.

I would love to see you there! The information is below: 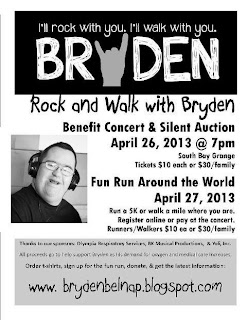